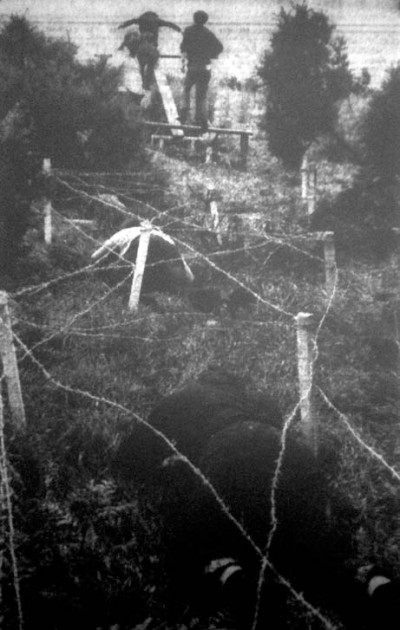 There seemed to be interest in this short piece from the Belfast Telegraph so I have transcribed it for everyone who wanted to see it. Once again, an interesting little historical nugget, particularly the fairly light-hearted tone – not exactly the way in which the press would regard the UDA in years to come.

Members of the Ulster Defence Association have been spending some hours each weekend in tough assault course training on a lonely hillside about an hour’s drive from Belfast.

The training has been going on for about a year – in fact since the UDA was officially formed – but now numbers have swelled as men and youths undergo the strict military-type training. The course is tough and the discipline during it is even tougher. Slackers are made to do extra exercises in front of the assembled company.

Last weekend’s training started in the mid-morning and continued into the early afternoon by which time at least three men had been physically sick with their exertions and all were feeling the pace.

The day started as men assembled in one of the former no-go areas and were taken to the training ground, which is invisible from any roads and sits high on a hill overlooking miles of green fields. The general impression was that the cows had come along especially to make the course dirtier.

The training started in light drizzle with the men formed into three ranks during physical exercises. This was stopped when the leader thought they were not putting enough into it. “Set them off to run round the field to warm up and keep them at it”.

The run completed, the exercises started again with talking and joking forbidden to make concentration on the training more intense. “That will get the last night’s Guinness out of your systems,” the trainees were told as they set off on the second foot tour of the field trying to dodge the cows on the way.

The cows indeed appeared to be unworried by this exhibition of human behaviour, which must have appeared very strange to them.

It was on the second circuit that the weaker started to feel the pinch. “One man’s not too well behind a hedge and I had to give first aid on the way past,” said a straggler. They then got down to the serious business of the assault course which had been constructed very much on military lines.

First came three small hurdles over which the UDA men had to do forward rolls. This was all very well in theory, but the first youth managed to go through the first obstacle rather than over it. Things got a bit better after this as they became used to the technique which many had not used since school PT lessons.

After the hurdles came the rope across which they had to swing hand over hand. Then they had to crawl through the barbed wire entangledment keeping low at peril of their trousers. The greasy plank came next and then the rope mesh.

The killer came near the end as limbs were getting weaker. They had to climb a tree, go hand over hand across a rope, climb a ladder and then slide down another rope to the ground.

A short run and a quick agility exercise ended the course and the first men through collapsed panting on the ground. “Save your breath, you’ll be needing it soon,” was the instruction before they started off on the third circuit of the field followed immediately by the second time round the assault course.

The general unfitness was attributable to the fact that the course had not been used much over the holidays and had only been reconstructed last week by volunteers. “Another few weeks and they will be as fit as fiddles,” said the instructor.

During the second time on the course the men were kept to their task by shouts of “You’d move faster than that if there was a bullet flying over your head”.

During the training no cars passed along the narrow road near the field, but three men stood watch at a gate ready to warn of the approach of Army or police patrols.

The men obviously did not enjoy the rigorous training but as one man commented “The spirit is willing but the flesh is weak”.

After the session all went to a local pub where the talk ranged from football to politics and from girls to horseracing. The regulars in the pub did not appear surprised at this influx of khaki-jacket strangers. They appeared used to the weekend invasion.

A few beers and the company were back into cars and on their way to Belfast again. The green fields and the rope ladders were behind them, but their UDA allegiances are still with them and the prospect of another week-end’s training was not too far away.